Packers Football 2017 Win Predictions With the NFL Draft fully behind us and the 2017 schedule now ahead, columnists writing about the NFL are firing up their prediction machines and trying to guess at how the various teams across the league will fare in the upcoming season.

To nobody’s surprise, teams like the Patriots, Steelers, and Falcons are seeing favorable reviews, and the Green Bay Packers Football are in the mix as well for the teams projected near the top of the league. Here’s a quick look at some predictions from a handful of writers. 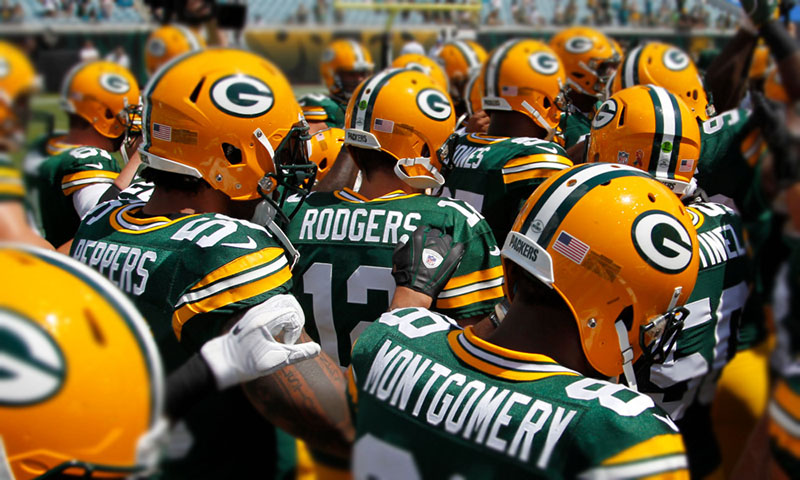 Jones did a game-by-game prediction for the whole league’s schedule, and he has the Packers earning home-field advantage in the NFC. In addition, he sees the Packers starting at a blistering pace and only losing one game (at Dallas) before a pair of divisional losses in the final two weeks of the season. Here’s some of Jones’ rationale:

Jones sees the Packers being three games clear of a crowded mess of NFC teams in second place, with the Seahawks, Cardinals, Buccaneers, and Falcons all at 10-6.

ESPN’s Packers reporter picked only Green Bay’s games independently from his colleagues, but he’s also on board for an improvement over 2016, when the Packers went 10-6. Demo’s take? If the passing defense is better at all than it was last year, that should help the team win more games and have a better seeding in the playoffs.

For The Win: more than 10 wins

Instead of a specific prediction, three writers for USA Today’s sports section played around with the over/under win totals set by Las Vegas for each team. The Packers’ number is 10 — the same number that they had a year ago — and every one of the three expects the Packers to improve on that number.

The common theme here is that the Packers found a way to get to 10 last year despite being flat-out “bad” (their words) for much of 2016, and that they won’t be bad again this year.

Over the past couple of years, Jeff Janis has become a Packers’ fan favorite. From being a practice squad standout to catching an amazing hail mary pass against the Atlanta Falcons in the playoffs a couple years back, Janis has made a name for himself with the Packers. Unfortunately, the Packers’ wide receiver depth chart got even deeper this offseason, and Janis could be on his last leg.

Green Bay is high on quarterback Joe Callahan, but he may be a roster cut ahead of the season. Brett Hundley is the obvious backup quarterback, while the Packers also signed undrafted free agent Taysom Hill this offseason. Hill and Callahan will battle for the No. 3 quarterback job, and Hill might just beat him out.

Another name on the roster bubble is running back John Crockett. Green Bay currently has Ty Montgomery listed as their starter, with rookies Jamaal Williams, Aaron Jones, and Devante Mays also fighting for touches. There just doesn’t appear to be a spot on the roster for Crockett unless he can beat out one of the three rookies that the Packers are excited about.

Jermaine Whitehead is also on the chopping block, as the Packers are stacked at the safety position. He is not a household name amongst Packers’ fans but has carved out a small role for himself on special teams. That being said, the Packers are likely to cut him ahead of the upcoming season.

Cutting a cornerback may not end up being in the equation for the Packers, but if it is, Demetri Goodson will likely be the guy. He has struggled to carve out a role for himself with the Packers thus far. Green Bay has Damarious Randall, Kevin King, Quinten Rollins, Davon House, Ladarius Gunter, and likely Josh Jones ahead of him on the depth chart, which makes Goodson’s roster spot questionable.